The inline 3D AOI system Vario Line · 3D from GÖPEL electronic is being transferred to a new generation. With regard to the increasingly demanding inspection tasks in today's electronics production, two significant innovations have been made which, on the one hand, massively reduce pseudo faults and, on the other hand, minimise handling times.

With a new 3D camera module, the Vario Line · 3D has a state-of-the-art centrepiece. It increases fault detection, ensures even fewer pseudo-faults and thus saves valuable resources. This is made possible by the highest optical quality in terms of projection and image acquisition, as well as by intelligent software modules that dynamically adjust the inspection parameters according to the respective situation on the assembly. The 3D technologies guarantee a measurement of components up to a height of 35mm as well as the inspection of optically critical surfaces with a large dynamic range.

Another technical upgrade of the new 3D AOI system generation is the optionally available 3-segment belt module for assembly transport within the system. The possibility of loading the next assembly during the inspection process and passing the already inspected one to the following module reduces the handling time by several seconds and thus shortens the cycle time in the production process. This 3-segment technology proves to be particularly efficient with time-intensive, bidirectional MES communication with interlocking technology. In this case, the time required for this is not included in the cycle time of the assembly but runs parallel to the actual inspection. 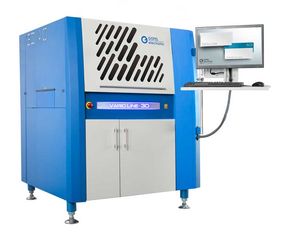