A new test system checks mechanical buttons on radio transmitter keys for functionality. It is based on a combination of force sensors and optical inspection mechanisms.

Even though more and more control units with touchscreen are being implemented in automobiles, conventional mechanical keys are still frequently used. The operation of these buttons or controls in the vehicle serves on the one hand to control relevant functions, such as the unlocking of vehicle doors or the opening of the tailgate. On the other hand, this process should also cause a high-quality operating feeling, at the same time the haptic feedback gives a first signal to the operation of the vehicle key.

The information on pushing a buttn is signaled by the keys via optical signals (for example an LED) as well as haptic feedbacks through the pressure point or force overcoming. Haptics is a sense organ that humans can actually measure with high precision. A slight change in the pressure point or a geometric shift to the contour perceives the user. Even different pressure points within a matrix can lead to irritation.

GOEPEL electronic has combined optical inspection mechanisms with a compact linear actuator with force sensors. As a result, different pressure points of the key buttons are dimensioned via a force-deflection characteristics. The individual switching points can be recorded and evaluated from the rest position via the switching point up to the over-limit of force. The individual drive elements for the haptic test of the various keys are connected to a central test device. This means that even complex shift matrices or different car key variants can be tested in one system, both in the design phase and in the assembly process. 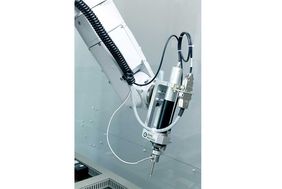