With the PicoTAP ATE, the popular JTAG/Boundary Scan Controller PicoTAP has been further developed for use in the simple performance range. With additional hardware elements, the flexibly configurable compact unit supports a variety of so-called embedded access technologies. These test and validation methodologies use instruments embedded in the design to test and programme complex boards with greatly reduced physical access. The PicoTAP ATE was developed as a compact device primarily for stand-alone use in the laboratory and in production. Its ultra-compact design makes it ideal for integration into various test systems.

PicoTAP ATE offers a control platform with a Test Access Port (TAP) for up to 30MHz, as well as 4 additional, freely programmable auxillary signals. This makes it possible to carry out numerous test procedures. Due to its compactness, the PicoTAP ATE can be used both as a desktop device and for integration into other system environments. A USB 2.0 high-speed interface is integrated as a standard control interface, which also supplies the PicoTAP ATE with power.

Compared to the existing PicoTAP, the new controller offers support for all access technologies. Due to its optimised price-performance ratio, it can also be used for very cost-sensitive applications, whereby the integrated JTAG/Boundary Scan software platform SYSTEM CASCON offers full support. Thanks to compatibility with the powerful SCANFLEX II platform, test programmes can be adopted directly. 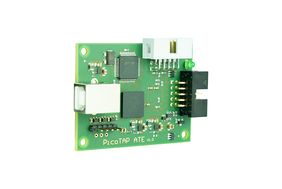