The Embedded JTAG Solutions with the JTAG/Boundary Scan Test from GÖPEL electronic can now also be integrated into the Seica Compact ICTs (In-Circuit-Test). The combination of the test systems gives the user an even greater test depth and optimizes test costs in the production of electronic assemblies.

The integration is an optimal combination between the GÖPEL electronic software SYSTEM CASCON and the In-Circuit Tester Compact from Seica. The hardware package includes the SCANFLEX II CUBE, the latest generation of modular JTAG/Boundary Scan controllers. The maximum configuration level also includes an I/O module that is connected to the analog subsystem of the Seica Compact via a pre-configured connector. This configuration can also be easily integrated into existing systems. The software is combined at various levels. On the one hand, all test sequences created in SYSTEM CASCON can simply be integrated into the Seica VIVA test plan as a functional test step. The results and diagnostic messages are transferred to the Seica test report. On the other hand, it is also possible to create interactive tests in which the tester channels are used as virtual Boundary Scan cells. SYSTEM CASCON imports the access points exported by the VIVA software and creates additional test patterns from them.

By integrating SYSTEM CASCON into the Seica Compact ICT, the user benefits not only from the advantages and capabilities of both test methods. Compared to the individual test systems, the interactive test, in which SYSTEM CASCON actively involves the tester's channels in test generation and execution, allows the user to significantly increase the overall test coverage. The complete solution was optimized for a comfortable interaction of both systems. When selecting the hardware components, particular attention was paid to compatible and recommended interfaces. By linking the software, the user controls the entire test sequence via a single test plan in the VIVA software. The SYSTEM CASCON software remains completely in the background on the test station. 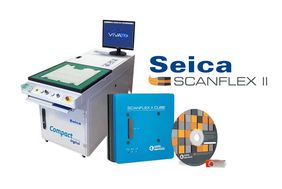