In addition to image quality and inspection speed, the resolution in the Z-direction has been massively increased. Even thinner reconstructed layers (3D technology) allow complete separation of the top and bottom assembly sides. This allows complete fault detection. A clear separation is indispensable, especially for PCBs assembled on both sides.

Customers who only require single-sided assemblies to be inspected have a further advantage with the new detector. The number of angled projections for generating a 3D image is variable with the MultiAngle Detector 3. This means that single-sided PCBs can be inspected with fewer projections, which increases the inspection speed enormously. In addition, the uniform component library can continue to be used with this procedure and the time for creating the test program can be drastically reduced.

The X Line · 3D is delivered with the programming software PILOT AXI 3.4 as well as the machine software PILOT Inspect 3.4. This allows the system to automatically monitor itself and to create usage-based maintenance plans in advance. This predictive maintenance function reduces maintenance and machine downtimes and thus also costs. 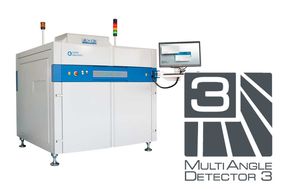