The Embedded JTAG Solutions and JTAG/Boundary Scan are not only an effective test procedure for the production of printed circuit boards. It offers many advantages, especially in the development, which enable you as a developer of Printed Circuit Board Assemblies (PCBAs) to find new approaches to solutions and achieve high quality.

This makes it possible to perform a comprehensive test in series quality from the very first prototype. The in-system programming and testing run via the same JTAG interface. And you don't even need a finished firmware. All you need in terms of hardware is a controller for access, e.g. SCANFLEX II CUBE.

The DFT-Guide (Design-for-Testability) explains what you as a developer should look out for when using Embedded JTAG Solutions.

First of all, you should know which components of which type are on the circuit board and how each pin of the components are connected to each other. The component types must then be assigned to corresponding models. For each Boundary Scan capable component there is a model which describes its Boundary Scan structure - the so-called BSDL (Boundary Scan Description Language) model. Depending on the provider, there are also different models to describe the non-boundary-scan capable devices, such as RAM devices or driver ICs. 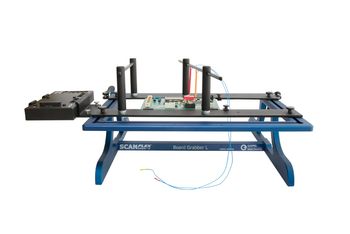 The SCANFLEX Board Grabber has been developed to support prototype verification and programming in the laboratory or at repair stations. It has a width-adjustable bracket that fixes PCBs of various…
×
Do you need help?